The Garmin Forerunner 645 Music, you guessed it, has music. We’ve all been waiting for this and now it’s here.

Music on the Forerunner 645 Music can be downloaded over Wifi or using a media manager with a standard dragging and dropping process via a computer. The ability to have music automatically download via WIFI is truly great as we live in a world where music isn’t bought but streamed. Adding new music and playlists will be no problem with this device as long as you have access to iHeart Radio & Deezer. Then you can pair a set of Bluetooth headphones whilst you run and listen with no phone. It is expected other streaming services will follow in the coming months. 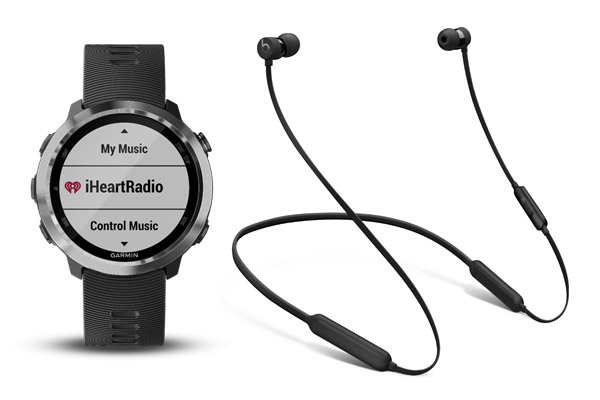 Another addition to the Garmin Forerunner 645 is Garmin Pay. This is one of our favourite features from Garmin, as it allows for tap and go payments with ease. Garmin pay doesn’t require a phone, so if you go out for a run and want to buy a drink or some small items you can. Local banks supporting Garmin pay include ANZ, NAB and Commonwealth Bank, with Westpac, suspected to be next-in-line.

If you’re thinking the Garmin Forerunner 645 Music looks familiar, it’s because it’s utilising the body of the vivoactive 3. This is a good thing, as the Garmin vivoactive 3 is not only light, compact but also slim. This results in a perfect running watch as there will be no problems with respect to it’s sizing. The only differences with its physical design are the buttons and no touchscreen.

The Garmin Forerunner 645 Music has all the features all come to know and expect.

The Garmin Forerunner 645 Music will start from $599 with expected high demand due to its music features. If you would like to get your hands on one ASAP, please place an order now!